The History of Newfrontiers

CCB is a Christ Central church, which is part of Newfrontiers family.  Newfrontiers is a family of churches that brings together some 2000 churches in some 75 nations.  Our story begins in the early 1970s, when Terry Virgo started to help a number of house churches become established around Sussex.  Terry was based in a church in Seaford, Sussex, which invited him to be their lead pastor in 1968.  He was a convinced charismatic and by God’s grace was able help lead the church into the gifts of the Holy Spirit. 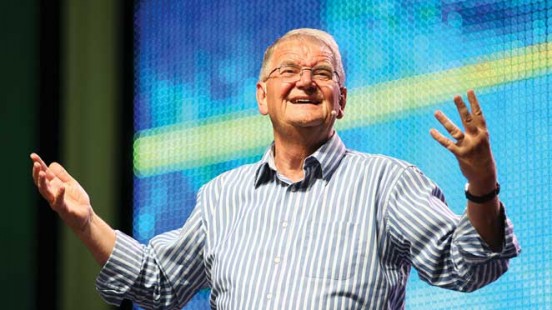 As time went on a few local “house churches” started asking Terry for input.  These grow to approximately ten in Sussex.  And soon each month about a thousand people would gather at Hove Town Hall, for celebrations and instruction.  From time to time Terry would gather the leaders of these churches for prayer and instruction.   As his influence grew as some churches leaders in the South of London asked for his input.  These churches had their own history, and were looking for help as they were transitioning into fully established charismatic churches.

Gradually the number of churches he worked with grew and grew.  Though at this time there was no thought of there being a recognised group or of having a title.

On one occasion, as they prayed together, one of the leaders had a prophesy, stating that:

They were as a herd of elephants that would break through and make a path where there was no path.

He said “there are no well worn paths before you”. (Later to be the title of a book written by Terry Virgo, telling the full history of Newfrontiers, up to the year 2000). This prophesy led to the churches beginning to be formed up as one group.

Newfrontiers International from the year 2000.

The story of Newfrontiers can be read in the book, No Well Worn Paths, written by Terry Virgo and
published in 2001. Following its publication, the Stoneleigh Bible Week was concluded and replaced by an annual leaders conference, which gathered Newfrontiers leaders from all over the world, plus leaders from within the UK and also students and twenties, who ran a parallel conference. This was entitled Together on a Mission and was held at the Brighton Centre, gathering approximately 5000 people each year.

During this season the number of churches planted grew within the UK to about 230 and internationally, to some 900 churches in over 60 nations.
In 2011, Newfrontiers changed its style of working. Terry Virgo handed over the leadership to about twenty different team leaders, scattered through out different parts of the world.  These men already carried much spiritual responsibly among the churches. But in this act were released to take responsibility for the sphere of service which God had given them.

As a result, each of these leaders is free to develop his own strategies, training programs, and gospel advance. This has led to multiplied church planting, training and increased expansion. From time to time, these leaders gather for prayer and fellowship, but essentially the advance of the work of Newfrontiers is in the hands of these team leaders, their teams and the programs that they put together.

Below is a conversation posted in the Leadership Journey Podcast (yourleadershipjourney.net)  from November 2020 with Terry Virgo talking on our history.  You can also read more in his autobiography, No Well-Worn Paths.

This website uses cookies to improve your experience while you navigate through the website. Out of these, the cookies that are categorized as necessary are stored on your browser as they are essential for the working of basic functionalities of the website. We also use third-party cookies that help us analyze and understand how you use this website. These cookies will be stored in your browser only with your consent. You also have the option to opt-out of these cookies. But opting out of some of these cookies may affect your browsing experience.
Necessary Always Enabled
Necessary cookies are absolutely essential for the website to function properly. This category only includes cookies that ensures basic functionalities and security features of the website. These cookies do not store any personal information.
Non-necessary
Any cookies that may not be particularly necessary for the website to function and is used specifically to collect user personal data via analytics, ads, other embedded contents are termed as non-necessary cookies. It is mandatory to procure user consent prior to running these cookies on your website.
SAVE & ACCEPT